On this page we present all our scientific publications and activities on conferences.

From 26th to 28th June 2019 we were with our project at the 5th Austrian Citizen Science Conference in Obergurgl/Tyrol. A great event of the Citizen Science Network Austria. The organizing committee consisted of representatives of the University of Innsbruck, the University of Natural Resources and Applied Life Sciences Vienna, the Center for Citizen Science at OEAD, Schweiz forscht (CH), Bürger schaffen Wissen (D) and Partizipative Wissenschaftsakademie at the University of Zurich and ETH Zurich. The participants and the scientific contributions were therefore correspondingly diverse. Representatives from universities, universities of applied sciences, associations, museums, funding organisations and many more came to exchange ideas across disciplines.

We were at the event with a poster on data quality and gave an insight into Irene Hoppe's master thesis (in German): On April 5th we had the opportunity to present a poster at the Austrian Academy of Sciences showing how our project can contribute to the UN Sustainable Development Goals. The Austrian Academy of Sciences organised the international symposium "Global Sustainable Development Goals in a Mediatized World" on 4 and 5 April 2019. Achieving the goals laid out in the Agenda 2030 in a mediatized world poses new challenges and opportunities for all stakeholders, including the scientific community.

You can see the presented poster here: 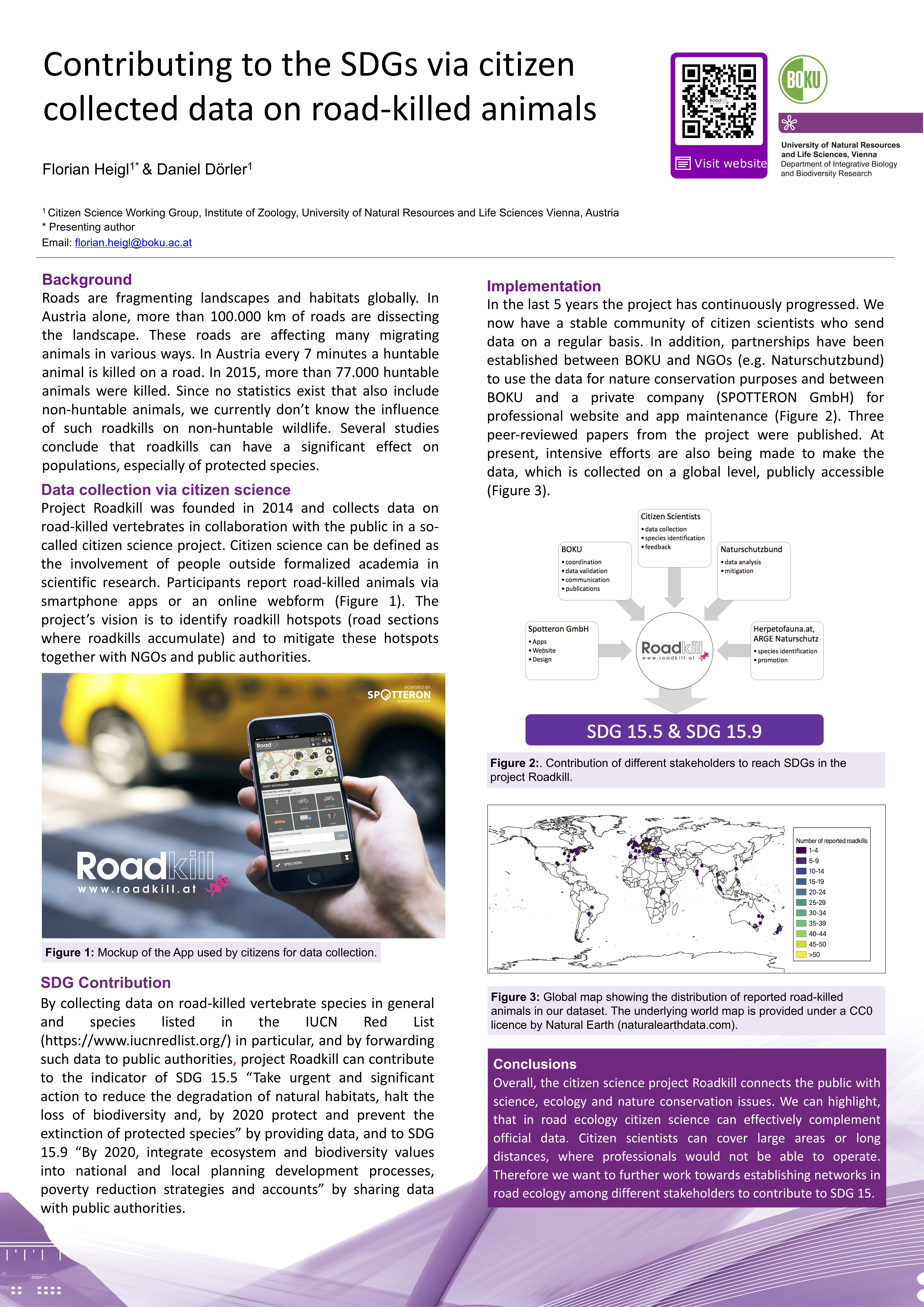 At the beginning of February we were invited to the Austrian Citizen Science Conference 2018 in Salzburg to present our experiences with Citizen Science in a peer-review process. Specifically, it was to show how we, from the project Roadkill, have experienced the process of publishing in peer-reviewed journals.

A short summary of the whole really exciting event can be found on Österreich forscht.

In addition, on the third day of the conference, the so-called Aktionstag, we were able to present the Roadkill project to a very interested Salzburg audience at a market stand and show in practice how citizens can help in our project.

For all interested in our experiences, you can see the poster presented here: We published our third paper in the project in the Journal BMC Ecology yesterday (27 June 2017). The article is open access available, please visit the article webpage to read the fulltext: https://link.springer.com/article/10.1186%2Fs12898-017-0134-z

We would also be happy if you read and share our blog: http://blogs.biomedcentral.com/bmcseriesblog/2017/07/07/using-citizen-science-to-monitor-road-kills/

To get an impression, here is our abstract:

Amphibians and reptiles are among the most endangered vertebrate species worldwide. However, little is known how they are affected by road-kills on tertiary roads and whether the surrounding landscape structure can explain road-kill patterns. The aim of our study was to examine the applicability of open-access remote sensing data for a large-scale citizen science approach to describe spatial patterns of road-killed amphibians and reptiles on tertiary roads. Using a citizen science app we monitored road-kills of amphibians and reptiles along 97.5 km of tertiary roads covering agricultural, municipal and interurban roads as well as cycling paths in eastern Austria over two seasons. Surrounding landscape was assessed using open access land cover classes for the region (Coordination of Information on the Environment, CORINE). Hotspot analysis was performed using kernel density estimation (KDE+). Relations between land cover classes and amphibian and reptile road-kills were analysed with conditional probabilities and general linear models (GLM). We also estimated the potential cost-efficiency of a large scale citizen science monitoring project.

We recorded 180 amphibian and 72 reptile road-kills comprising eight species mainly occurring on agricultural roads. KDE+ analyses revealed a significant clustering of road-killed amphibians and reptiles, which is an important information for authorities aiming to mitigate road-kills. Overall, hotspots of amphibian and reptile road-kills were next to the land cover classes arable land, suburban areas and vineyards. Conditional probabilities and GLMs identified road-kills especially next to preferred habitats of green toad, common toad and grass snake, the most often found road-killed species. A citizen science approach appeared to be more cost-efficient than monitoring by professional researchers only when more than 400 km of road are monitored.

Our findings showed that freely available remote sensing data in combination with a citizen science approach would be a cost-efficient method aiming to identify and monitor road-kill hotspots of amphibians and reptiles on a larger scale.

The 10th Annual Meeting of the Macroecology Working Group for the Ecological Society Germany, Austria & Switzerland was held from 19-21 April 2017. This year, the titel of the conference was "Macroecology in Space and Time". Colleagues from the University of Vienna organised the conference with a broad focus on conservation biology, evolution and global change. We took the opportunity of living at the conference venue and presented a poster on our project and some new results. 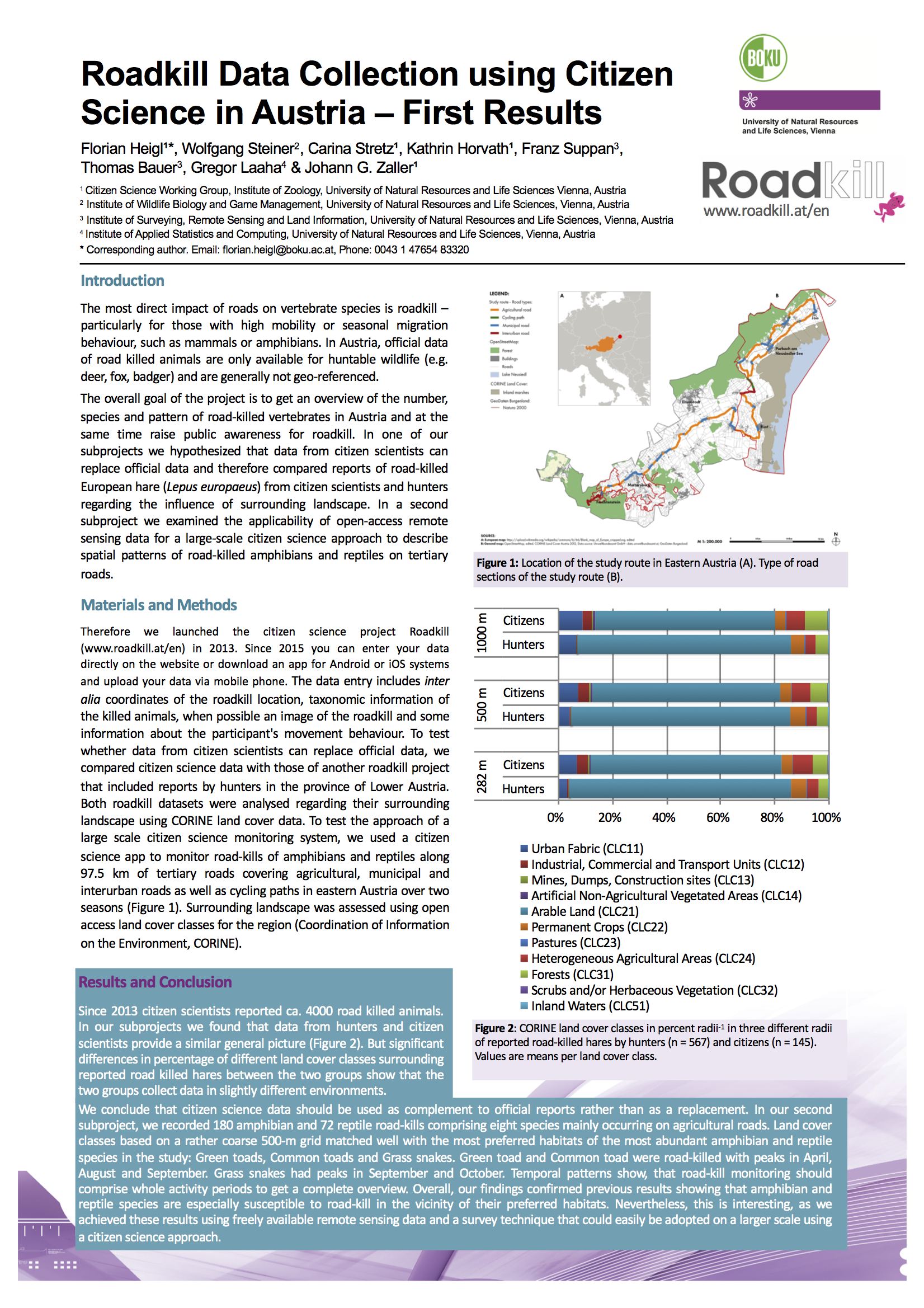 Today (10th October 2016) we published a new paper in Remote Sensing with the title "Comparing Road-Kill Datasets from Hunters and Citizen Scientists in a Landscape Context".

We really wish to thank all citizen scientists in Project Roadkill for investing time and reporting data. Here is the abstract of our published paper:

Road traffic has severe effects on animals, especially when road-kills are involved. In many countries, official road-kill data are provided by hunters or police; there are also road-kill observations reported by citizen scientists. The aim of the current study was to test whether road-kill reports by hunters stem from similar landscapes than those reported by citizen scientists. We analysed the surrounding landscapes of 712 road-kill reportings of European hares in the province of Lower Austria. Our data showed that road-killed hares reported both by hunters and citizens are predominantly surrounded by arable land. No difference of hedges and solitary trees could be found between the two datasets. However, significant differences in landcover classes and surrounding road networks indicate that hunters’ and citizen scientists’ data are different. Hunters reported hares from landscapes with significantly higher percentages of arable land, and greater lengths of secondary roads. In contrast, citizens reported hares from landscapes with significantly higher percentages of urban or industrial areas and greater lengths of motorways, primary roads, and residential roads. From this we argue that hunters tend to report data mainly from their hunting areas, whereas citizens report data during their daily routine on the way to/from work. We conclude that a citizen science approach is an important source for road-kill data when used in addition to official data with the aim of obtaining an overview of road-kill events on a landscape scale.

The IENE is a network of experts active in the field of ecology and linear transport infrastructure. This network is non-profit, non-governmental and non-political.

The title of this year's event was "Integrating transport infrastructure with living landscapes" to highlight how much infrastructure, from roads to airports to power lines, is part of the landscape. On the conference website you can get very detailed information about the conference, the presentations, posters and workshops. The conference was characterized by topics such as "What do functioning green bridges look like", "What new technical developments are there in the field of wildlife accident prevention", "What influence do roads have on biodiversity" and many more. The difference to many other conferences is that here scientists, officials from ministries, engineers and company employees meet to discuss and learn from each other. 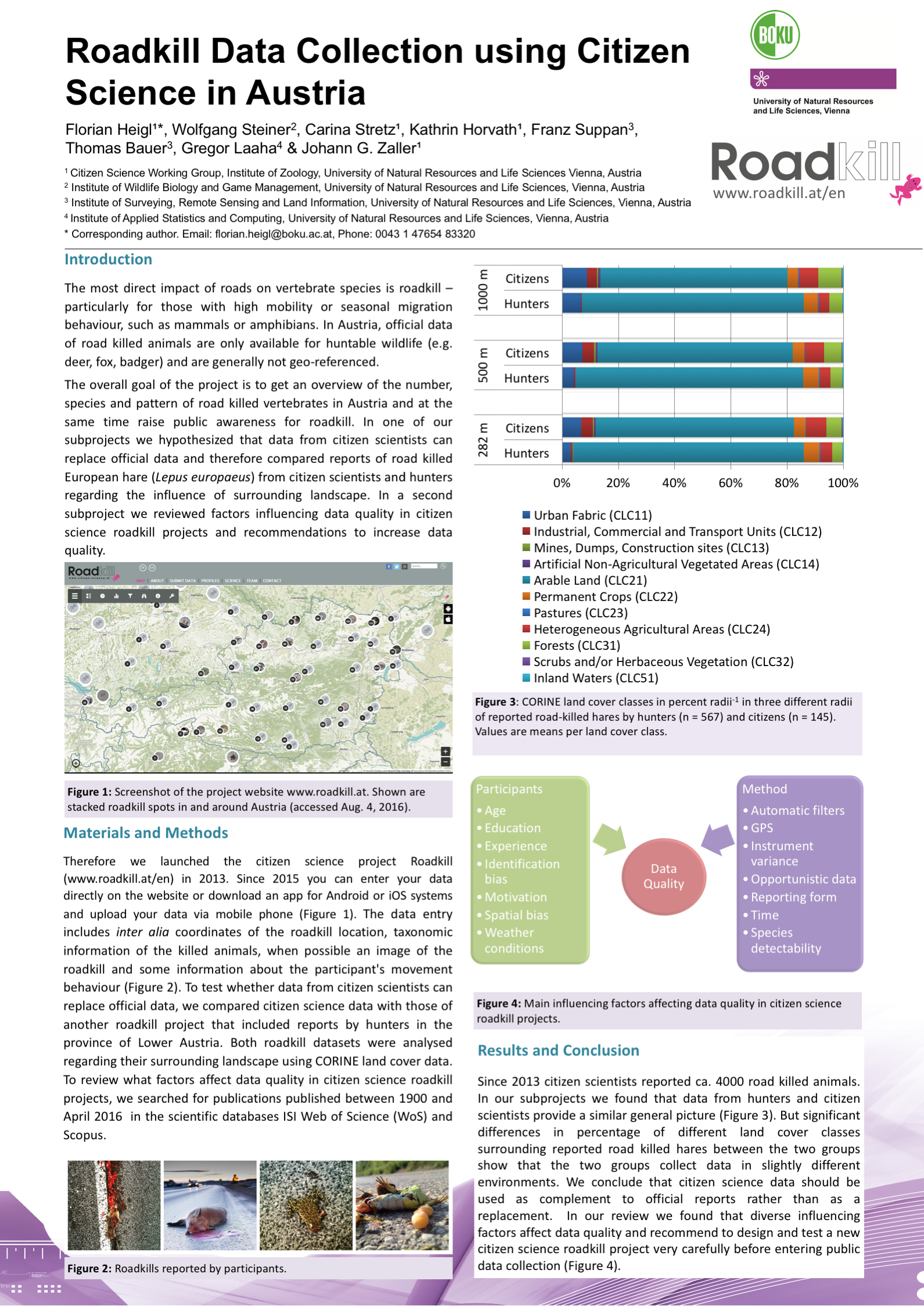 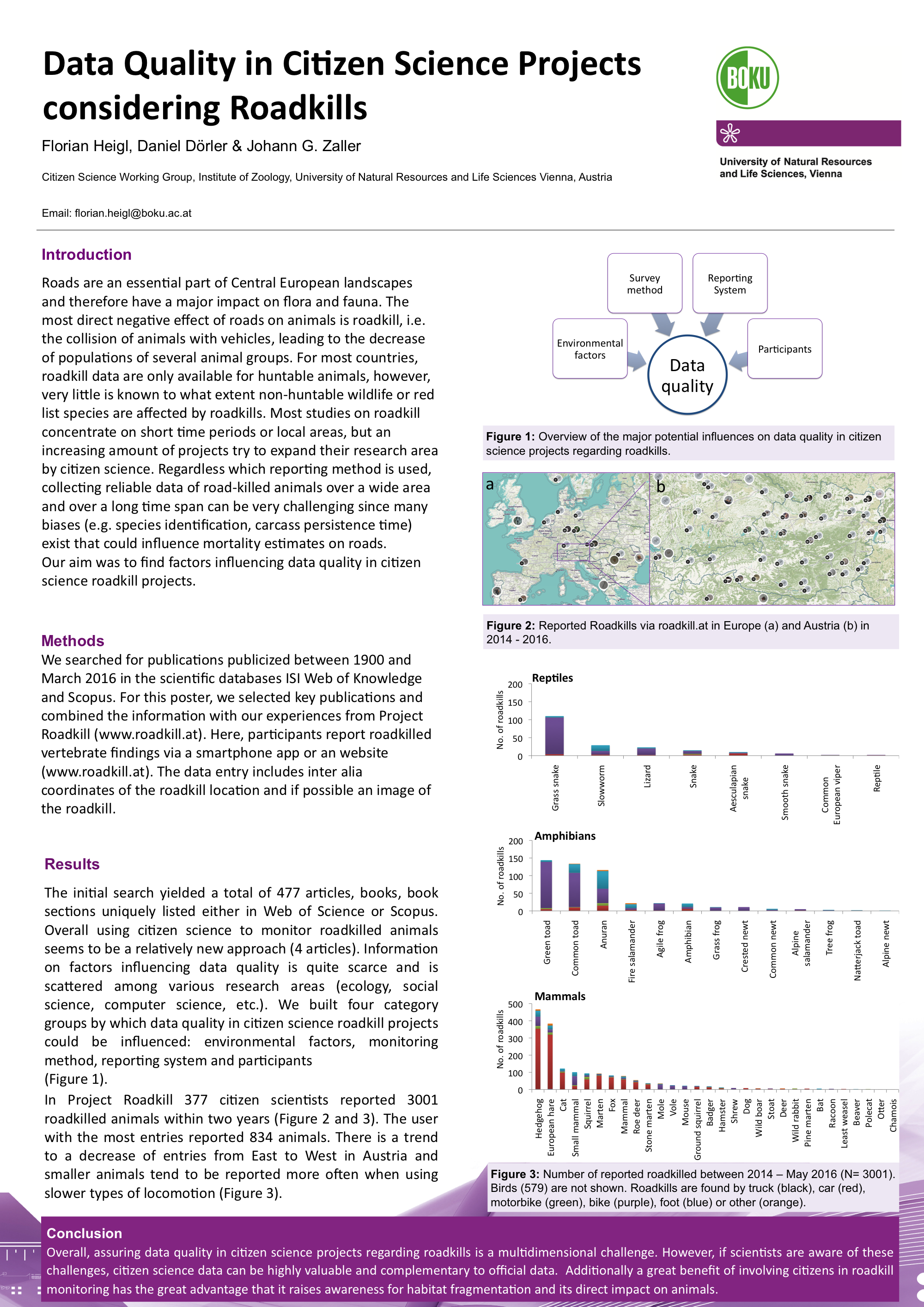 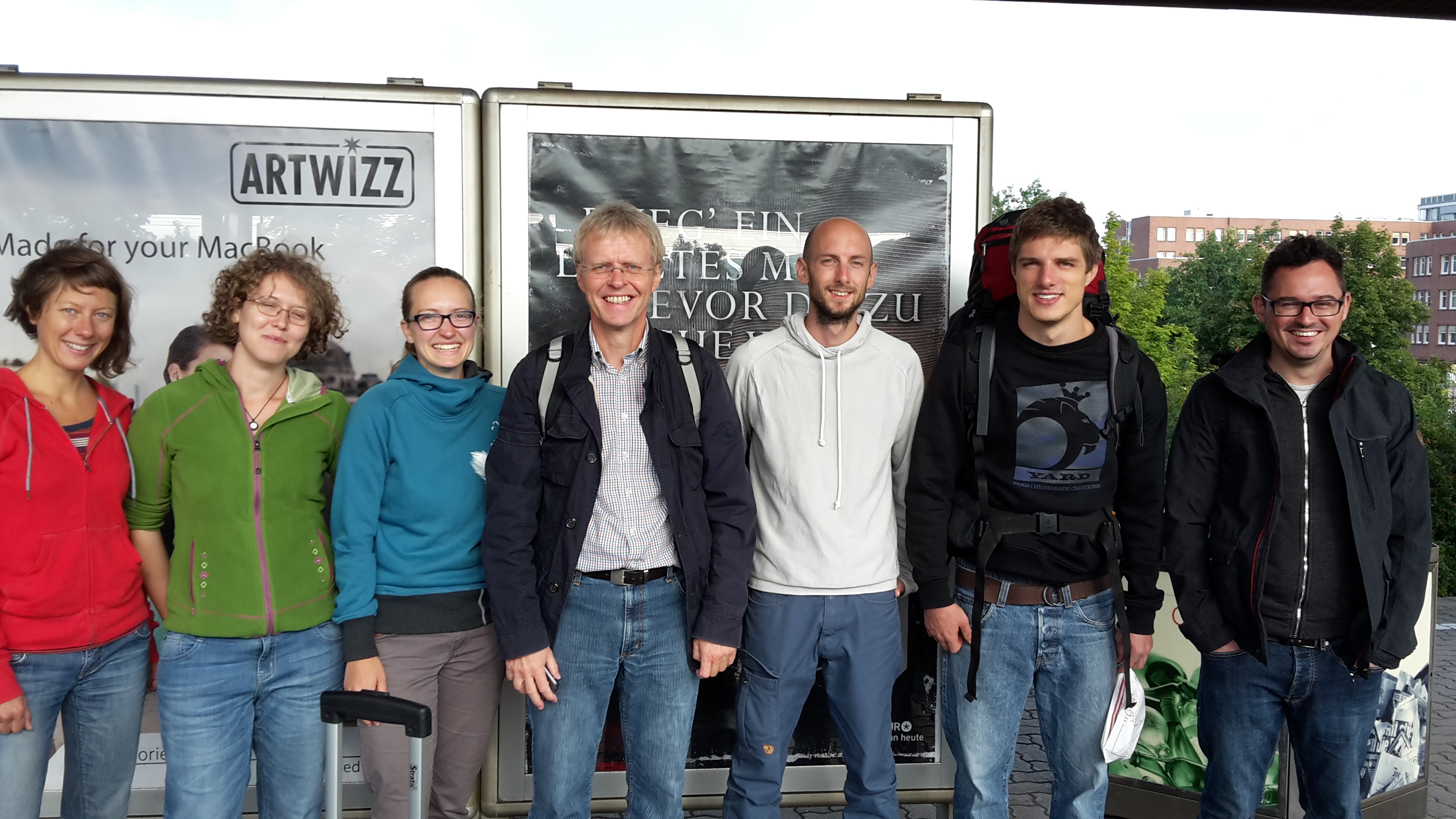 Representatives of the Institute of Zoology at the GFÖ 2015.

Florian Heigl and Daniel Dörler are answering these questions in German in the "Jahrbuch 2015 der Bildung für eine nachhaltige Entwicklung", which was published in June 2015.

More Information regarding the Jahrbuch: http://www.umweltbildung.at/nachrichten/langtexte/jahrbuch-bildung-fuer-nachhaltige-entwicklung-2015-bne-reloaded-soeben-erschienen.html

15th April 2015, Carina Stretz, master student at the Institute of Zoology at the University of Natural Resources and Life Sciences, Vienna presented the poster Project Roadkill: Defining hotspots in European Hare vehicle collisions using datasets from citizen scientists and professionals at the European Geosciences Union
General Assembly 2015. More than 11000 scientists are attending the EGU GA to talk about latest trends and findings in a variety of scientific fields. Citizen cyber-science as a crowdsourcing method is gaining popularity around the world especially in projects dealing with environmental issues. Many European universities are faced with increasing student numbers along with unchanged numbers of advising lecturers and professors. Thus, a challenge for natural science educators is to teach and transfer knowledge despite weak lecturer-to-student ratios. In search for a solution to this problem, we applied a citizen science crowdsourcing approach in an obligatory course of the Bachelor programme of Environment and Bio-Resources Management at the University of Natural Resources and Life Sciences Vienna, Austria. The project, called BOKUroadkill, engaged students in reporting roadkilled animals they observed during their daily routine over a period of three months. Data collection was carried out via a freely available, customized mobile app (EpiCollect) that ran on students’ private devices or via an additional online reporting form for students without smartphones or tablets. After three months, 109 students reported 1,236 animals killed on roads, analysed roadkill patterns, and provided feedback on the project. Based on this feedback, we developed a new online platform extending the project for all citizens to participate (www.citizen- science.at/roadkill). Based on our experience with BOKUroadkill, we conclude that a citizen science approach in higher education is suitable for (1) courses with weak lecturer-to-student ratios, (2) addressing important elements of motivation for learners and (3) familiarizing students with scientific research. Our results indicate that citizen cyber-science projects can well be developed as student projects initially before extending the project to a broader public.

Get the free paper:  http://hcjournal.org/ojs/index.php?journal=jhc&page=article&op=view&path[]=10 Representatives of the Institute of Zoology at the GFÖ 2014 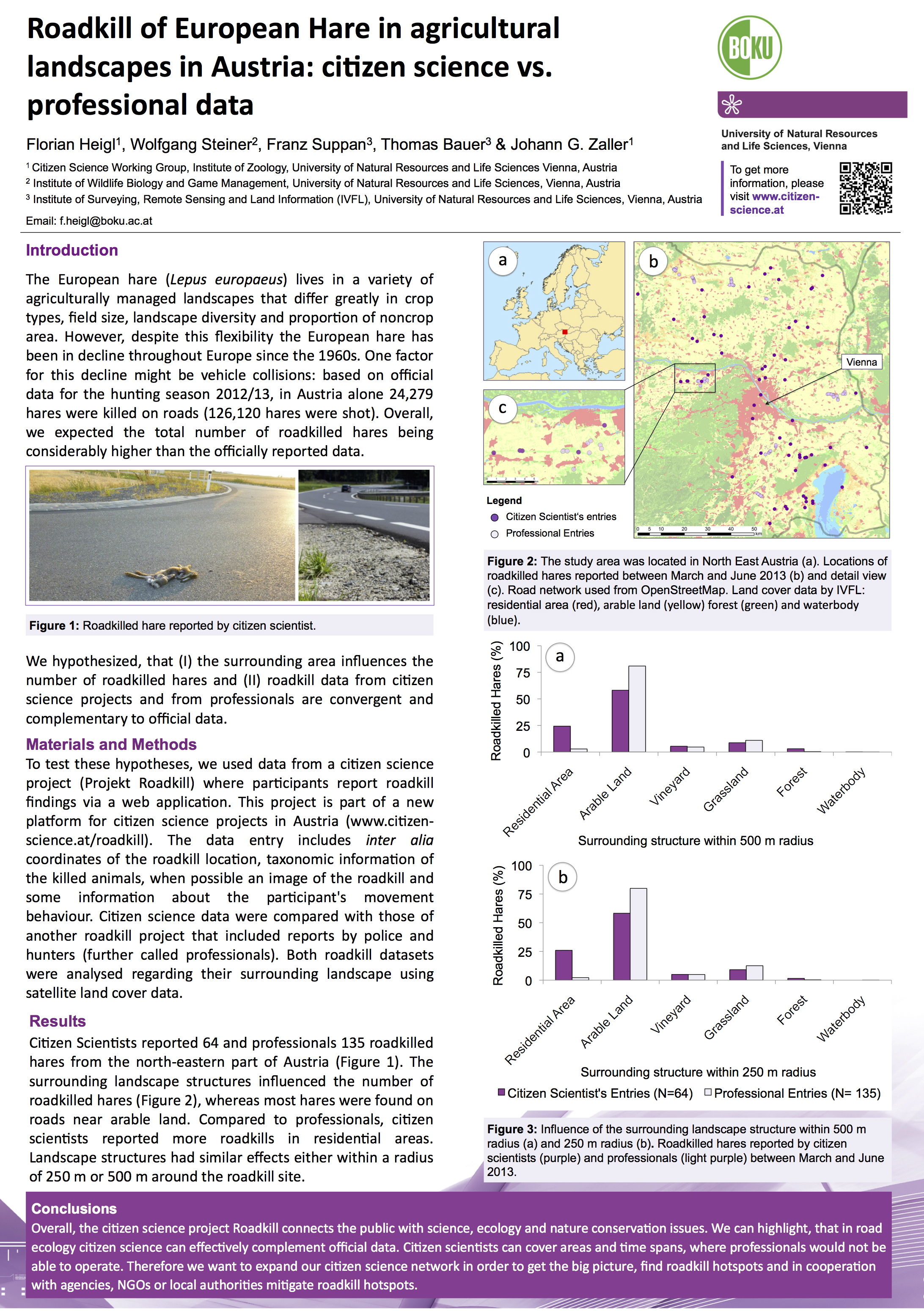