The first coronalockdown in spring 2020 also affected the roadkill project, as our just published paper in the journal PeerJ shows. In particular, roadkills of those animals that became active again after hibernation were reported significantly less than in previous years. But is this because fewer animals were actually roadkilled, or because of the reduced mobility of citizen scientists in the project? To find out, we did a survey of the Austrian citizen scientists in the project and found that a majority of respondents said they felt they had reported fewer roadkills, whether or not their mobility behavior had changed during the lockdown. Combined with traffic data from other sources, the results suggest that perhaps fewer animals were actually hit. What is quite certain, however, is that citizen science projects in general, when analyzing data from this period, need to be aware that the lockdown may have had a significant impact on their data in some cases, and this needs to be taken into account when interpreting it.

The global COVID-19 pandemic is affecting human activities and lives as never before in our lifetime. To avoid the unnecessary deaths of thousands of people due to the excessive demands on our healthcare systems (Anderson et al., 2020), most governments around the world have taken strict measures to reduce infection rates in the population (WHO, 2020). In Europe, curfews or strict restrictions on leaving the house or apartment were in place for many people in spring 2020 (Hale et al., 2020). Activities were reduced to necessary services such as transportation and the sale of food or medicine (Hale et al., 2020). Austria was among the first countries in Europe to introduce strict curfew restrictions on leaving one's home starting in mid-March 2020, specifically from March 16 to April 14 (Hale et al., 2020). During this period, people living in Austria were only allowed to leave the house for five reasons: (i) to go to work if in a systemic occupation (e.g., supermarkets or pharmacies), (ii) to buy groceries or medicines, (iii) to help others who could not care for themselves, (iv) to take a short walk outside, always keeping a minimum distance of one meter from other people, and (v) to save one's own life in case of a life-threatening event (e.g., fire) in the home (Republic of Austria, 2020). This meant that many people worked from home, reduced their working hours, or lost their jobs, minimizing activities or travel around the country (Poledna et al., 2020).

This reduction in human activity in Austria, as well as in several other countries, has had ecological impacts, such as improved air quality due to a dramatic decrease in industrial activities and traffic (Zambrano-Monserrate, Ruano & Sanchez-Alcalde, 2020). In addition, many reports of "nature's recovery" during curfews have been shared in the media and social media around the world, showing wildlife in populated areas (Rutz et al., 2020; Bar, 2020). However, Helm (2020) noted that evidence of the direct effects of COVID-19 restrictions on wildlife and environmental protection, including the effects of reduced road traffic on the number of animals roadkill, is largely anecdotal to date and based on expected impacts rather than new data.

Based on citizen participation in data collection, an influence of COVID-19 curfews on roadkill reported in roadkill projects was also suggested:

What all of these studies have in common is that they rely on data that could be consistently collected even during curfew periods (e.g., police reports, professional monitoring, carcass removal), but not on citizen science data. In one study, citizen science data were even excluded from analyses because of the potentially high impact of curfew restrictions (Bíl et al., 2021). It is therefore crucial to understand what kind of impact curfews also have on citizen science data in order to avoid potential biases or interpretation errors.

In Austria, the Roadkill project has been ongoing since 2013. The aim of the project is to minimize the number of animals run over in Austria. To this end, the influences of traffic and the landscape around roads on vertebrates are being studied. The project is in its first phase, which aims to obtain an overview of the number and distribution of roadkills using Citizen Science (Heigl et al., 2017; Bíl et al., 2020). As part of the project, citizen scientists report roadkill animals they discover on roads via apps for Android or iOS or via the project's website (www.roadkill.at/en). 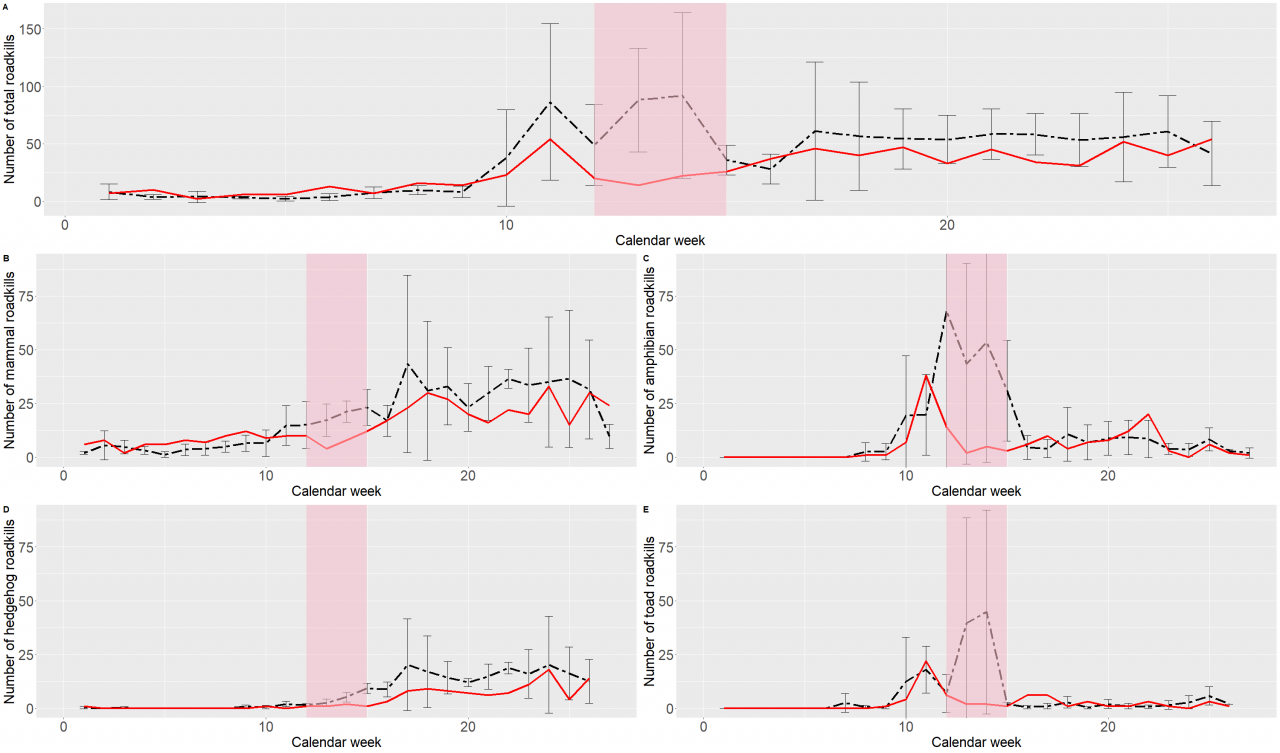 In previous years, the number of reported roadkills increased for many species in the spring due to the migration of these animals to their spawning grounds (e.g., common toad) or because of foraging (e.g., hedgehog) after hibernation. The overall increase in the number of reports of roadkill was less pronounced in the spring of 2020 than in the spring seasons of previous years. However, at this time we did not know if this decrease was due to fewer animals being killed on the roads due to reduced traffic. Another explanation could be that project participants were on the roads less and therefore could not report the same number of roadkills as before, even though the number of roadkills themselves had remained unchanged. The challenge of teasing out the sociological factors that influence the data collected in ecological citizen science projects is well known and has been studied many times. For example, we know that some projects experience data bias on weekends (Courter et al., 2013; Cooper, 2014) because citizen scientists have more time to collect data on weekends, or that data are more often reported near settlements or roads (Johnston et al., 2020) because many people are traveling in those areas. However, the behavioral changes induced by curfews are unique and need to be studied in detail to understand how these changes affect ecological data collected in citizen science projects.

Therefore, the goal of our study was to investigate how the strict restriction on leaving one's home in Austria during the first COVID-19 lockdown in spring 2020 affects data collection in the Roadkill project. We tested the hypothesis that the decrease in roadkill reports was due to a change in mobility behavior among our participants by conducting a survey of Austrian project participants. The results of this survey will have implications for further analyses of the data collected during the closure, not only in Project Roadkill, but in all citizen science projects that rely on opportunistic ecological data collection. 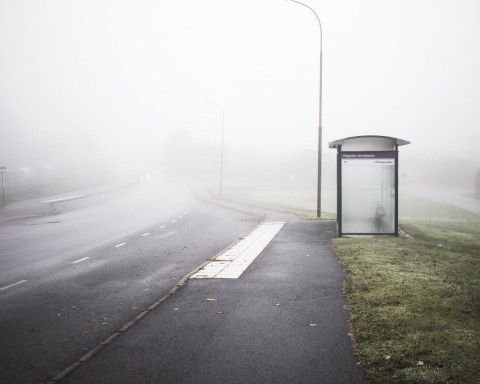 To test our hypothesis that the decrease in reports of roadkills was due to a change in mobility behavior among our participants, we compared the responses of respondents for whom there had been no change in the frequency of their trips, the length of the trip, the type of road, or the type of transportation mode used with the responses of those people for whom there had been some change in mobility behavior due to the curfew. Here we found no differences between the two groups, i.e., a majority of both groups reported feeling fewer roadkills.

Further analysis revealed that reducing the length of time people traveled on roads and reducing the frequency with which they traveled were the only factors that influenced the number of roadkills reported by participants. Respondents who estimated that they reported more roadkills than in the past overwhelmingly indicated that they either traveled longer distances or that the length of their routes did not change at all or that they traveled more often. However, only 3 respondents overall reported more roadkills than before the lockdown.  Translated with www.DeepL.com/Translator (free version) 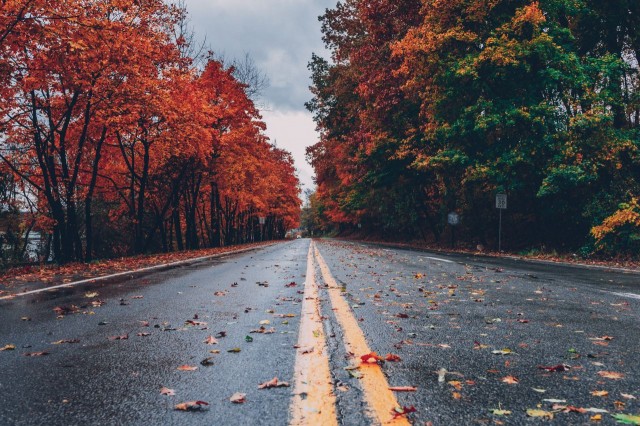 Responses indicate that routes, types of roads used, and types of transportation used have not changed for the majority of respondents. All three questions about these potential effects of curfews were answered negatively by at least a two-thirds majority. Consequently, we also found no significant impact of these issues on the estimated number of roadkills reported. In addition, those who felt they reported more roadkills than before the lockdown did not note any change in routes, roads used, or mode of transportation.

COVID-19 clearly had an impact on Project Roadkill and its participants. The number of reported roadkills in 2020 decreased significantly during the lockdown weeks compared to the average number of reported roadkills in 2016-2019. In previous years, there were two peaks in the spring when many roadkills were reported. In 2020, the first peak was less pronounced, and the second peak was absent altogether. Two explanations are possible for this, although we think the second is more likely. First, the lockdown measures meant that data were not reported primarily from those animals that become active in early spring after hibernation, such as many amphibians or mammals (e.g., hedgehogs), due to the reduced activities of our citizen scientists. Second, our results suggest that the overall number of animals killed may have decreased due to reduced vehicle traffic on roads during the lockdown. In addition, frequency of use and length of distance traveled appear to be the primary factors in a decrease in roadkill reports. We also found that the majority of respondents saw fewer roadkills than usual. The survey demonstrates the duality of project roadkill. When there are fewer project participants on the roads and this is representative of society, on the one hand, reports to the project decrease, but on the other hand, the negative impacts of roadkill on vertebrates also decrease.

Our study indicates that future data analyses based on citizen science projects should take into account the possibly changed reporting behavior of citizen scientists during the COVID pandemic to avoid false ecological conclusions.

Cooper CB. 2014. Is there a weekend bias in clutch-initiation dates from citizen science? Implications for studies of avian breeding phenology. International Journal of Biometeorology 58(7):1415-1419

Helm D. 2020. The environmental impacts of the coronavirus. Environmental and Resource Economics 76(1):21-38

Łopucki R, Kitowski I, Perlińska-Teresiak M, Klich D. 2021. How is wildlife affected by the covid-19 pandemic? Lockdown effect on the road mortality of hedgehogs. Animals 11(3):1-8