In Project Roadkill, which is coordinated by the University of Natural Resources and Life Sciences Vienna, you can participate in a scientific project with the aim to reduce roadkill. In this project we investigate, which animals are killed on roads and which factors are influencing roadkills. Your data allows us to identify roadkill hotspots. Our vision is to mitigate those hotspots in cooperation with local authorities.

What does roadkill mean?

Roadkills are all animals killed on roads. In most countries, official data on roadkills are only available for huntable wildlife. In the year 2012, amongst others 24852 European hare, 36865 Roe deer, 1414 European badgers were killed on roads in Austria. However, there are no data available on the effects of roads on non-huntable wildlife or red list species such as European hedgehog (Erinaceus europaeus) or European green toad (Bufo viridis).

Why is roadkill important? 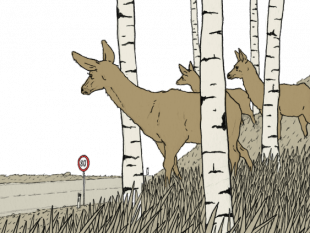 Habitat fragmentation by roads has a severe impact on many animal species, particularly for those with high mobility or seasonal migration behaviour, such as mammals or amphibians. As a consequence, roadkill is one of the main reasons for the decrease of populations of several animal groups. Compared to a human flat, habitat fragmentation is like a road right in your corridor, seperating your living room from your kitchen.

Animals cross roads when foraging, in mating season (like deer, which cover long distances in search for a mating partner in autumn) or changing from winter to summer habitat (like amphibians). Species which migrate over long distances are especially affected by roadkill.

Humans are also affected by roadkill. For drivers animals on roads are a great danger and most people are stressed because of the ethical burden when killing an animal. Not only accidents with big animals like deer or wild boar are causing damages to persons and/or property, also small animals like hedgehogs or toads can lead to damage because of evasion or breaking maneuvers.